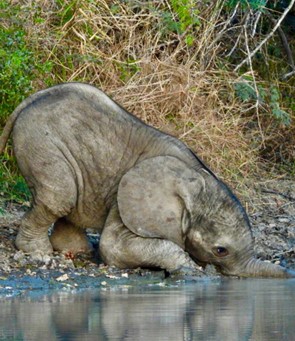 The past few months has seen the arrival of numerous new arrivals to the Rietspruit Game Reserve. The arrival of baby giraffe and baby eland all drew the obligatory “aah cute”

Black- Backed jackals were re- introduced after rabies had almost decimated our current populations.

Jakes Oosthuizen (Assistant Reserve Manager and Leadwood Homeowner) was equally busy with the introduction of crocodile to all our large earth dams followed shortly by the introduction of Ostrich. If that was not enough Jakes ensured that the Cheetah swap Project was completed successfully – well done Jakes!

Greer Leo-Smith (Homeowner) also lent a hand and added buckets filled with Tilpia and catfish to various  dams- we are sure the crocodiles where very grateful.

Our Rhinos also welcomed new arrivals much to all our delight.

However, the totally unexpected arrival of a baby elephant was undoubtedly the BIGGEST surprise of all. The new baby elephant arrived a few weeks after the elephants arrived.

The new arrivals to the Rietspruit Game Reserve have all added their charm to an already special place.